I slept in my clothes since Havana was still cool and the musty blankets were counter-productive to sleep. Apparently the government-issued pillow wasn’t much better since I woke up stuffy and watery again. Benadryl came to the rescue.

Remi and I ate breakfast. We’d postponed our morning departure a little because we got back to the hotel so late. With the extra time, the kids wanted to check out the beach, so a group of us made our way across the street and down to the beach. The wind was stronger than it was the day before. The waves were stronger too. We gave frequent cautions to the kids as the waves pushed them around and further down the coast. After a while, we moved the swimming party to the resort’s pool, which felt a little more manageable.

At the front desk of the resort, there was an old desktop computer running Windows XP so people could check their email. With some negotiating, it allowed me to send a note back home to let everyone know that we’d arrived safe and sound.

It was getting close to lunchtime, so we opted to go for a quick lunch before the bus got there to pick us up. There was a restaurant across the street, so we congregated there and got a little education in Cuban restaurants. Lesson 1: They don’t have everything listed on the menu. Lesson 2: Don’t go if you’re in a hurry. The restaurant experience took some time. A magician was on staff and made the rounds of the tables for tips. Everyone wants tips in Cuba — especially anyone working with tourists. This was an open-air restaurant. Cats and dogs wandered in and out. Birds flew in and perched overhead, and pooped on a few of us. Yum. 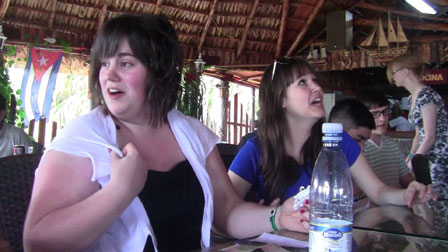 Bird poop in the restaurant

Our driver and Pastor W showed up and waited with us at the restaurant. We had a few minutes to talk. Hugo Chavez passed away during our visit to Cuba. Because of Cuba’s close ties to Venezuela and Chavez, the state declared four days of national mourning. That meant no music was to be played, which we concluded would probably change a bit of our itinerary. Day three was OK since we were visiting pastors again.

We boarded our bus and went to pick up the presbyter of the churches we would be visiting.

The first pastor we stopped to visit had a large property with a building on it. He wanted to expand to develop a regional resource center for local pastors. This is a major project that would take significant time and investment to achieve.

We met the second and third pastors of the day together. One of them coached a baseball team and the youth pastor of the church played baseball with the local youth as a tool for evangelism.

Our fourth visit of the day was to another small church. We were told that this was a “rougher neighborhood” and instructed that we’d have to approach the church in groups of four a few minutes apart to lessen the noise and attention we drew to ourselves — although we were conspicuous wherever we went.

The pastor wasn’t home. We visited with his wife and two daughters. They played a song for us and discussed the work they were doing in the area. They were trying to build a roof for the structure that we’d walked through to get to the room we were in.

One of the pastor’s daughters looked to be about the same age as the kids we had with us on the trip. She stood with her arms folded listening to the dialogue going on between the adults unaware that she attracted people’s attention. Someone in the group asked about her and through the discussion, we learned that she was turning 15 this year.

Turning 15 is a big deal in Cuba as well as other Latin American countries. It’s called the Quinceañera and it is akin to a debutante “coming-out” party. It’s a celebration of a girl’s transition into womanhood. There was some discussion about the cost of such a celebration. The youth discussed it and then stood and offered to help her with the expenses of this party. The young girl was surprised — this was something she’d discussed with her mother because all the other girls in school were planning their parties. The family didn’t have the resources to throw a party like that, so her mother told her to take it to the Lord. This was something that the girl had been praying about, and we were there to see the Lord answer her prayer.

We headed out and managed to visit one more pastor. He treated us to oranges and watermelon. The mosquitoes were out in full force by this time. It was getting late.

Our next stop was an evening church service. A few of the kids on our team prepared some music and they were allowed to share it. Nothing was mentioned about the musical hiatus for Chavez’s death. Pastor Paul spoke and two of our kids shared a testimony. The congregation included many kids in the same age range as the team we had with us and they were planning on attending the youth rally in a few days. Nearly all of them came forward at the end of the service and our team prayed with them. One girl in particular was moved by the testimonies and made a decision to follow Jesus. 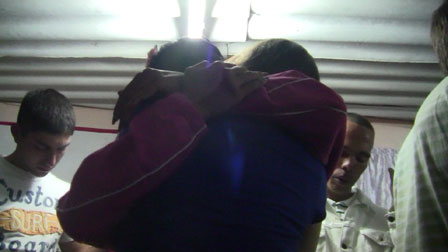 We left the service and dropped off the parson and his wife. Before getting off the bus, the parson’s wife stopped and said that she was touched that so many young people came in our group. She told them that they would be missionaries.

We drove back to our hotel. Because of our late start this day, we missed another pastor who was expecting a visit. Nobody liked that. And funds were running low since we were still having trouble getting money out of the ATMs in Cuba.

The drive back was contemplative. I thought a lot about the people we visited and how amazing it was to watch our kids from Canada praying with the kids from Cuba. It seems like God does more stuff when we go on a trip like this. The thought struck me that it’s not that the location is any more special, but that the journey is necessary for us. We change when we decide to set aside our routine and our own desires and we get up and go somewhere for the sake of someone else.

God is not in the destination. He is in the journey.