I recently returned from a one week visit to Cuba with 16 other people from our church. I wrote down some thoughts while I was there and I thought I would share them with you in a series of posts.

My first trip to Cuba was in October of 2008 with a team from Glad Tidings Church in Moncton. We toured the countryside visiting pastors, encouraging them and helping in any way we could.

The trip organized for this year was a little different. This time we were bringing ten teens from the youth group. My daughter decided she wanted to go with them. My wife, Rhonda, and I knew this day would come. I wanted to be there with her when she went on her first mission trip, so we signed up for another visit to Cuba.

The kids (let’s call them kids) practiced dramas and sharing their testimonies each Saturday for two months leading up to the trip. Now the day had come where we were actually going to go.

Day one was all about travel. The night before, we packed everything and left it waiting at the church. The day started early with a meeting time of 5:00 AM followed by a drive to Halifax to catch our direct flight to Varadero.

I’m not really a traveler. Not that I’m a nervous flyer or anything, I’m just more of a home-body. Standing in the departure lineup at an airport takes some effort for me because I always think about what I’m leaving behind, not what I’m headed for. So I tried to focus on what we were going to be doing on this trip.

* Sophie’s drawing on the plane ride

On the flight, we filled in our Cuban Immigration cards. We were warned not to lose them and told that there would be an Exit Tax to pay when we return home. It reminded me of visiting Prince Edward Island: free to come, pay to leave.

After a four-and-a-half-hour flight, we landed in Cuba.

The airport in Varadero had the distinct smell of Cuban cigars which are plentiful in the duty-free shops. We lined up to pass through immigration and hoped that everything was going to go smoothly. There had been issues with immigration on previous trips. Part of what we’ve done on each trip was bringing supplies down for pastors, so suitcases full of underwear, socks and toothbrushes can raise suspicion — especially if they think the items are destined for the black market. This time, we made it through with only one incident because one of the kids was young and traveling without a parent.

The quirky sights started at the airport. Most of the vacationers on our plane were already in party mode before we landed. The Cuban women working at the airport wore uniforms that included a short brown miniskirt and stockings that you don’t normally see outside the racy section of a lingerie catalogue.

The first item on the agenda was to exchange our Canadian money for Cuban Convertible Pesos (CUCs or “Tourist Money”). One of the tellers shortchanged four members of our party 10 CUCs each (roughly $10 each). We were all impressed with the sleight of hand that you normally only see in Vegas. We returned to the teller to correct the “oversight”.

We loaded the bus to Havana – our home base for the week. We’d stayed in Veradero the last time I came, but Havana was going to be a better base for our visits this time. The tour bus announcer entertained us with stories about how environmentally conscious Cuba is nowadays. That becomes a bit of a running gag for the week whenever we encounter natural gas wells on the beach or the stench of diesel fuel from the harbour.

After the two-hour bus ride, we arrived at our hotels and got our room assignments. We were back out on the road soon after meeting our host for the week, Pastor W. We loaded into our bus and headed to downtown Havana for supper with a few people that we’re working with down there. The venue is a nice restaurant. My daughter, Sophie, calls it: “Cuban Hooters”. The young men in our group gallantly make every effort to focus on the menu while they ordered.

Already, we’ve noticed the men in Cuba outside the church context are a little more “macho” than we’re used to in Canada. While leaving the restaurant, we even have a guy approach us to ask if we have any single girls for him in our group. Haha! We assured him with a “no” and “they’re too young” as best we could through the language barrier, but I thought to myself: “we’ll be doing frequent headcounts.”

We adjourned from the restaurant and headed down to the harbour where we could hear the sounding of the cannon at 9:00 PM to signal the closing of the gates at the Castle of San Pedro de la Roca – a colonial fortress. While we loaded back into the bus, there was a man there shaking maracas and playing a harmonica; looking for tips. The kids ignored him, but he was persistent and stared into the window of the bus for the next five minutes. When he decided that no one was going to exit the bus to give him money, he flashed a pre-written slip of paper which translated to: “sex much afraid?” We weren’t quite sure what that meant. 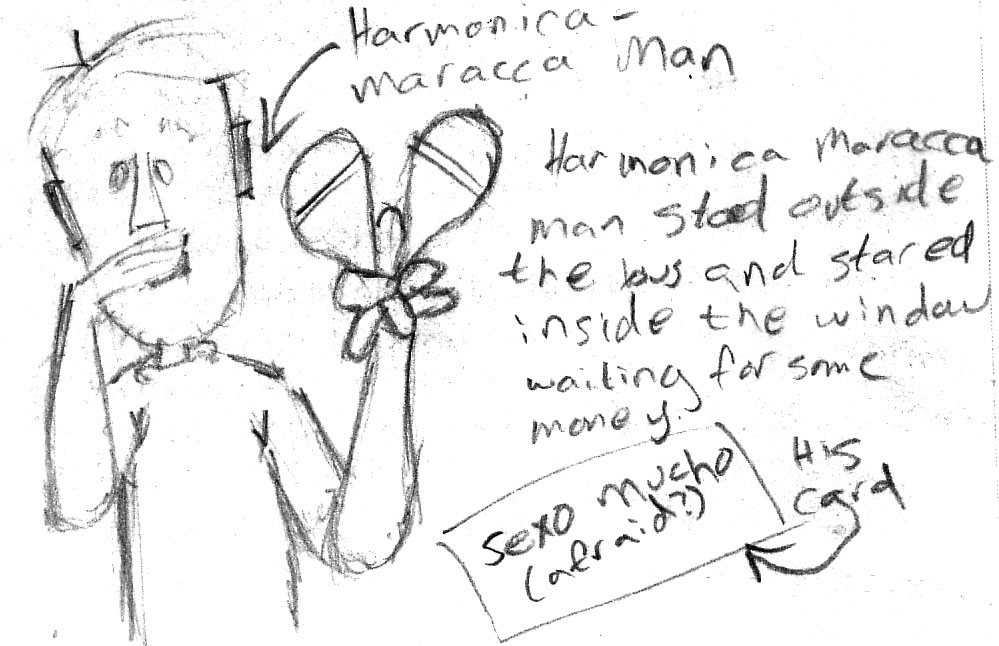 The crew was tired from the traveling, so the beds were a welcome sight.

Leave a Reply to Mary